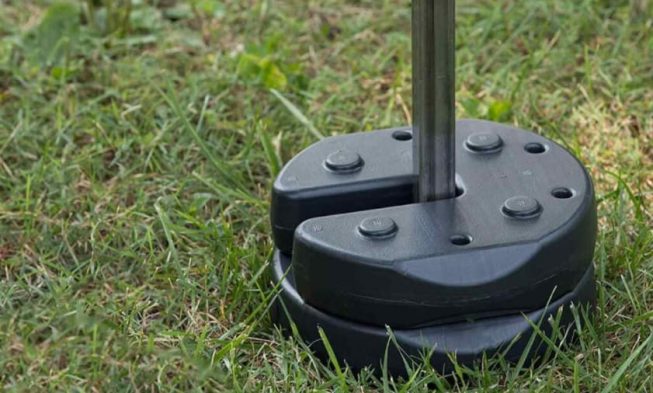 The explanation will make you want to use it in rainy and windy conditions to keep your gazebo in its place.

The Way to Use Gazebo Weights

You only have to strap the weight products directly to the gazebo. Ensure that items are heavy enough so your gazebo is safe enough in a strong wind or heavy rain.

This product works effectively when you want to fix gazebos to the decking, patio, or grass. The process is easy to do because you don’t need to drill holes.

Types of Gazebo Weights You Can Buy Online

Most reputable online stores or marketplaces sell wrap-around gazebo weights. It consists of small bags that attach around the legs using Velcro.

Some people prefer to use this product because it comes in a variety of sizes. You only have to fill the bag with dry and heavy materials.

Do gazebo weight work for large gazebos? Yes, it is! You can buy weight bags with up to 50 pounds capacity. This product works effectively to hold a 20-feet long or above gazebo.

Disc weights are also popular products among online stores. The manufacturers fill this product with cement.

It is a faster and more flexible alternative to anchor a gazebo since you can stack the disc weights until reaching the desired weight per leg.

These products are similar to disc weights but smaller. The manufacturers have filled these products with heavy materials.

You only have to slip them over the legs of the gazebo and slide them to the ground. The surface of the stackable canopy weight is also flat. As a result, you can stack these gazebo weights until reaching the right weight.

The Ideal Gazebo Weights to Hold Down a Gazebo

You should know the size of the gazebo first to know the gazebo weights you need to hold it down.

Homemade Gazebo Weights You Can Apply

Wait until the blocks are set and remove the frame. Use the blocks as gazebo weights. PVC pipes are a great alternative to hold a gazebo.

Take four sections of PVC pipe and fill them with concrete. Step end caps on both ends and attaches an eye bolt to the top one. It helps people who keep asking do gazebo weights work even if creating it by yourself.