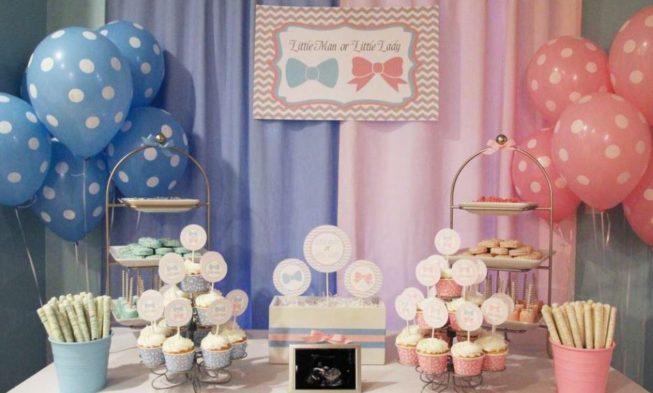 This party can be one of the most exciting moments of being a mother and father to reveal the news to the family and friends.

In this modern technology era, parents would likely to announce their baby’s gender by posting it on the social media.

Well, that would be spread really fast. All of your friends and family that get in touch with social media account would find it out easily.

But, that’s not fun at all. There’s no special and surprise moment that they would get. What about having a little fun with it.

You can have a little party for it with fun activities and enjoyable food. Your family and friend would gladly come to the party.

When it comes to the term “party”, one important thing you need to prepare is the food. Well, in this article, you would discover great food ideas that would be easy to make for your gender reveal party.

A doughnut is a very first thing that we’d like to recommend for your gender reveal party food ideas. It’s not an ordinary doughnut. Specifically, It’s the Boston Creme doughnuts. Or you can go with some kind of jelly-filled doughnuts.

You just need some appropriate equipment like a quite large pan and some oil, if you want to make it yourself at home.

You can get some recipes or tutorials online. Or, if you don’t want to get troublesome, just order the doughnuts from the bakeshop.

You could fill it with raspberry, strawberry, blueberry, or even a chocolate jelly. The color of the filling would reveal the gender of the baby too. It sounds so much fun.

Cupcakes, cupcakes, who doesn’t love this piece of colorful sweetness. It’s more special because it’s got a secret in it. Whether it’s a boy or a girl, you would find out the moment you taste and savor the sweetness of these cupcakes.

It’s going to be a great option for the gender reveal party food. It’s currently quite popular among other choices for gender party.

You can add some printable cupcake toppers to match your party theme.

If you don’t want to spoil any surprise, you shouldn’t add the picture that identifies the gender of the baby. Having two different colors of toppers would strengthen the mystery.

Oreos are one of the most favorite cookies in the world. People would love to have a bite of this piece of sweetness. It’s a great addition to be packed in a lunch of your children too.

There are some types of Oreos out there. I think the best one is the Golden Oreo.

As you can see, the Golden oreo looks more shiny and colorful. Instead of having dark desserts, you can have it more festive with that sprinkle.

It would be a great cookie for a gender reveal party event. It’s been floating all over Pinterest that this Oreo Confetti is perfect for that event.

Again, having two colors that identify whether it’s a boy or a girl exists in this cookie concept. Just prepare for the pink and blue frosting to be covered half of each oreo. Then, give it a little sprinkle to add more color to it.

This trending small like a lollipop cake is one of my favorite. It seems hard to make but when you try to make it, you will realize that making cake pops is not hard at all. It’s basically just balls of cake with sticks in them.

The sticks would allow you to hand the cake without even touching the cake. The ingredients are also very simple. You’re just gonna need a cake mix, some icing, candy melts, lollipop sticks, and sprinkles (optional).

Those are four foods you can make for a gender reveal party food that is extremely easy to make. All of them are in a concept of two colors. The two colors represent the gender of the baby whether it’s a boy (blue) or a girl (pink).